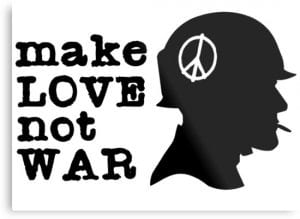 So far in the book Slaughterhouse Five by Kurt Vonnegut his anti-war sentiment sticks out to me the most. While there are many other underlying themes such as the discussion of free will which make Slaughterhouse-Five such an intricate read; I chose the anti-war theme over the other themes because it is ultimately what connects everything in the book. For example, while the discussion of free will is discussed with all-knowing aliens from a different dimension called the Tralfamadorians, the anti-war aspect of the book is what causes it which is why I chose it over the free will theme. Furthermore, Slaughterhouse-Five encapsulates the sheer brutality of the war not only through the PTSD that Billy Pilgrim suffers, but also through the effects Billy’s PTSD has on the people that are close to him, the same people trying to take care of him. “Do you know what I say to people when I hear they’re writing anti-war books? […] I say, “Why don’t you write an anti-glacier book instead?”(Vonnegut 9). This quote signifies how Vonnegut views war as something that has been institutionalized within our world. By starting the book off this way, Vonnegut shares his take on war. This ultimately allows Vonnegut to display the downsides of this institutionalized violence throughout the entire novel.

One area in which I laud Kurt Vonnegut for is his connection of many themes in Slaughterhouse-Five. I even prefaced it in my earlier paragraph and blog post. I think the way he incorporates his take on free will through the Tralfamadorians and merging that with the anti-war message of the book was excellent. The way in which Vonnegut intertwines the story of Billy’s struggles that he faces due to the PTSD he has from war and the discussion of free will has really made Slaughterhouse-Five a great read thus far. Another aspect I enjoy so far has been the way Kurt Vonnegut has strayed away from a conventional narrative. Slaughterhouse-Five as a story in and of itself has an intriguing plot line that would’ve had me hooked, but, the way in which Vonnegut narrates has me even more interested. For example, he doesn’t necessarily narrate everything chronologically which makes the story a tad bit more fascinating as the reader must be completely immersed to fully understand the ins and outs of every little detail in the book. 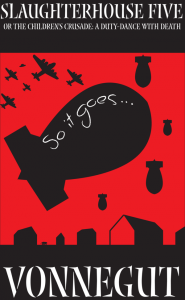 I chose to read Slaughterhouse-Five by Kurt Vonnegut for my independent reading book. Slaughterhouse-Five is an anti-war novel about a man named Billy Pilgrim who has fought during World War II and experienced the catastrophic bombing of Dresden. The narrative starts off with the normal parts of Billy’s life, he’s an optometrist living in Ilium, New York who has two kids and a wife. But, this traditional narrative is quickly broken up as Billy gets in an airplane crash where he was the only survivor. Promptly afterward he goes on NYC radio stations telling everyone that he has been abducted by Tralfamadorians, beings from another planet. Her daughter gets very upset with Billy who has seemed to go insane from the crash. While she keeps on trying to contain Billy, he’s very persistent in getting his message of the Tralfamadorians out. He even spreads things that he has learned from these so-called “Tralfamadorians”. While I haven’t gotten very far in the book, so far, the pages I have read have been filled with interesting dialogue and characters which has intrigued me. I feel like in the end, the book will shed light upon how war took an innocent man and turned him into a lunatic. By doing showing one innocent man’s sanity get taken by the war, Vonnegut shows that others could and have faced similar things. Through all of this, Vonnegut thoroughly gets his anti-war sentiment across.

In the book Slaughterhouse-Five by Kurt Vonnegut, Vonnegut adopts an unreliable narrator to immerse the readers into a mind with PTSD. By taking the reader through the mind of a possible-PTSD carrier, Slaughterhouse-Five not only spreads awareness for PTSD but also shows how severe it is. One of the aspects about the book that I also greatly enjoy is that it isn’t solely about the war. But, it’s more specifically about how the war impacted Billy Pilgrim’s life. I think Vonnegut so far has created a great medium in which he uses a plot that is forced to incorporate war but doesn’t overdo it by basing the story entirely on war. Through this Vonnegut can thoroughly show the atrocious side effects of the war while not over-describing the gory parts of the war for too long.